Traffic signals are efficient in assigning the right of way for roadway users, but they are not always the optimal solution. The Federal Highway Administration (FHWA) encourages agencies to consider roundabouts during new construction and reconstruction projects as well as for existing intersections that have been identified as needing safety or operational improvements. This month’s Safety Spotlight features a proven safety countermeasure for reducing vehicular collision rates and severity. 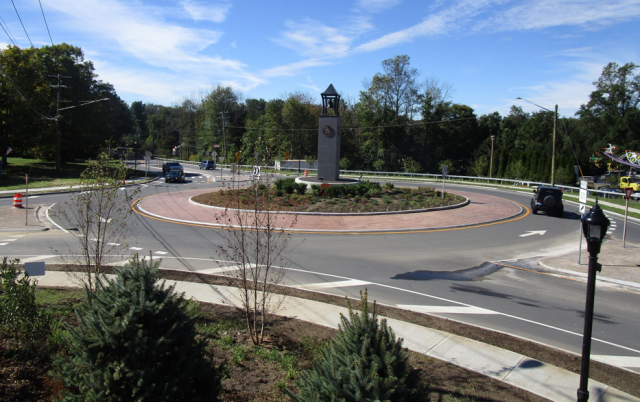 Construction on a new roundabout at the intersection of Shelton Road (Route 110) at Monroe Turnpike (Route 111) in Monroe was completed in 2018. The new roundabout, designed by CTDOT at a cost of $4.1 million, replaces an existing stop-controlled intersection with stop signs on the Route 110 approaches and a flashing beacon.

This location has a history of high crash frequency, with 27 crashes in the three-year period from 2008-2010. There were four injuries due to crashes within this time frame, and in the fall of 2012 a vehicle left the roadway at the intersection, resulting in a fatality. Though one can’t truly put a value on a human life, for statistical purposes the U.S. Department of Transportation calculates the figure to be $9.1 million. The statistical value of injuries range from around $30,000 for a minor injury to $1.01 million for a serious injury.

In the approximately six months since June 2018 when the roundabout traffic pattern was put in operation, there has only been one reported rear-end collision. The crash occurred during construction and there were no injuries. This reduction in crash frequency is expected to continue.

In addition to its safety benefits, the roundabout adds community appeal. According to Monroe Town Engineer Scott Schatzlein, P.E., “there were a lot of complaints about the intersection in its prior configuration, but I haven’t received any complaints since the reconstruction. Now, the improvements add to the sense of pride in the community.” The bell tower in the center of the roundabout, which features the town seal and depictions of three sections of the town, has become an important local landmark.

Additional traffic signal resources can be found on the T2 Center website at: https://www.t2center.uconn.edu/signalcircuitriderNEW.php