Public works folks are exposed to Weapons of Mass Bleeding (WMB) every day! These include any tool or equipment that could cause or create massive bleeding or loss of limb. Chain saws, heavy equipment, lifts, etc.—the list goes on and on for the work environment. Even at home or on the road you could witness or become a victim of some catastrophic event (active shooter or car crash) involving massive bleeding or loss of limb.  As a response to the way the world has changed, the American College of Surgeons created a program for civilians to be trained on how to help manage a massive bleed/loss of limb situation and developed equipment typically reserved for military field applications to utilize.

The program is called Stop the Bleed. https://www.stopthebleed.org/

The training is less than 2-hours long, and hopefully your organization will either be provided Stop the Bleed kits or at least a tourniquet to be added to your first aid kit. Fingers crossed none of us will ever have to use this training, but I’d feel better working with others who I know could handle a bad situation.

You can find training classes in CT by searching at: https://cms.bleedingcontrol.org/Class/Search

I found 22 classes being presented, mainly in East Haddam and Wolcott, but for a DOT/public works group I’m sure the local ambulance company would have qualified people to do classes. If you really get stuck finding a STB instructor, contact me at Irsafetyguy@icloud.com. I’ll help find you an instructor. 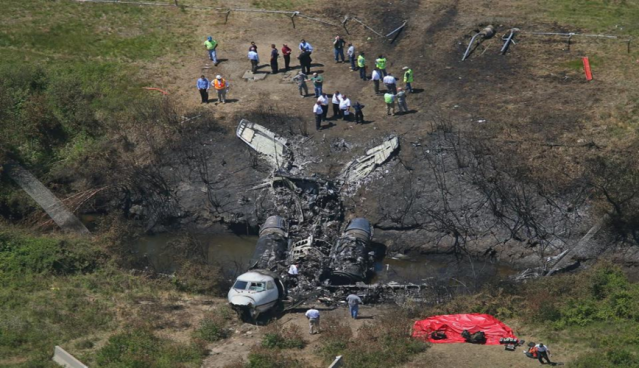 Would you believe that the work you do daily is just as dangerous as flying a multi-million dollar jet?

There are many similarities between you and these jet pilots, really. Check this list:

And probably more I’ve missed. But in the jet crash, nine people died because two highly trained experienced pilots, who had flown together over 178 times in the last two years of their lives, failed to do the same thing you should be doing every day. They were well trained to use the equipment, as you should be for any equipment you operate. As for following procedures, here’s where the complacency and peer checking failed.

Of the 178 flights these two pilots had made over the last two years of their lives, they had performed a pre-flight checklist only twice. Performing the FAA required pre-flight checklist would have had reminded the crew to unlock the flap and rudder controls device called a “gust lock” that protects the flaps and rudder from damaging winds while parked on the ground. By the time they realized the gust lock was still engaged and preventing them from taking off, the jet was going 190 MPH. You can see the horrifying end for the crew and seven passengers.

Has your crew become complacent about following procedures, wearing all required PPE, doing the pre-job TAILBOARDS? I view the pre-job TAILBOARDS like the pre-flight checklist. Both are designed to remind the tired, the complacent, the routine of all the little details needed to be performed to be safe. What if the co-pilot had been insistent that they do a pre-flight checklist, even if it irritated the pilot? Maybe they and the seven passengers would still be alive. What if you insisted you have a good TAILBOARD before the job starts, so what if someone gets ticked off? Maybe it means everyone will go home tonight.

Looking back on the injuries/accidents I have investigated, many occurred after lunch or when conditions changed at the job. Something went wrong, a piece of equipment failed, and the crew was trying to jury rig instead of calling for the right equipment. Supervisors/Leads should be the ones to say, “Hold up, let’s talk this over and have a conversation on what we’re going to do now.” New TAILBOARDS, just as a new pre-flight check, can save lives.

I have met two power linemen who lost both arms in electrical accidents. In both cases, conditions changed at the job, and there was no TAILBOARD to discuss the new work. Too bad they didn’t.

P.S. I made up the Weapons of Mass Bleeding (WMB).

To look up the full report of the plane accident, search for Hanscom Field, MA, May 31st 2014.