In the aftermath of a natural event that causes trees to come down, arborists, tree workers, and public works crews in the field are faced with safely removing trees off power/phone/cable lines. Research on the Internet does little to uncover any consistent recommendations on techniques or equipment on how to unload the “cocked and loaded” power/phone/cable lines (I’ll call bundles) under tension from the trees. This article will offer some approaches to consider the next time your crew is faced with safely releasing bundled stored energy. Every situation will be different. The variables to consider are daunting and require thorough conversation and situational awareness to develop a plan of attack.

Most importantly, if there is any involvement with power lines, the power lines must be “dead and grounded” or cut clear (open break) of any potential source of backfeed before any tree work can begin. Only the utility can make this happen, not fire or police. Wait for a face-to-face confirmation with a utility person.

Recently, I was out with power crews working after a wind storm. I witnessed what could have easily been two fatalities, even though the tree crews believed they were taking the appropriate precautions to control the release of stored energy in the bundles as the trees were cut back. The crews were operating from their experience with past events. The plan was to tie off the bundle with ¾ inch rope and an F-350 bumper hook. Once the tree was unloaded from the bundle, the bundle could be slowly allowed to return to its normal 20-foot height from having been compressed onto the ground by the weight of the very large oak tree between two 40’ poles.

Good plan—it didn’t work. The ¾ inch rope failed immediately, launching two pieces of cut wood (150–200 lbs. each) over the head of the chainsaw operator as the bundle’s stored energy released. Fortunately, the pieces didn’t hit anyone, nor did the bundle strike the chainsaw operator. After everyone started breathing again, the first words were, “Guess we needed more rope.”

The next day’s situation was a much simpler, or so it appeared. Part of a white pine had broken and fallen into one phase of the power line and was also compressing the phone and cable lines; but unlike the day before, the lines were still in the air. Once power was made safe, a cut was made from a bucket and the released stored energy was enough for the unrestrained power and phone/cable lines to surprise the operator who barely had time to react by leaning backwards and having his hardhat knocked off. Had the operator not reacted so quickly, the released lines could have caught him under the chin, inflicting all sorts of injuries.

We were lucky. In both cases we were lucky because no effort was made to the look into the near miss. There was no documentation, no investigation, no research, no papers to be presented to prevent the next near miss, also called a Serious Injury Fatality (SIF) event. Historically, we’ve taken all the corrective actions after the SIF. This time we’re going to talk about the situation before the SIF occurs.

These are just two examples of situations which happen dozens of times during storm restoration. Every situation will be different, every bundle will have different load factors that will determine how much stored energy will be present. One common issue, however, is that the conditions you are faced with can kill or seriously injure you and your employees if not addressed correctly. 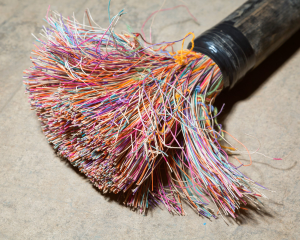 Typical Phone Bundle – strain is in the 1000 lb. range even without the tree. 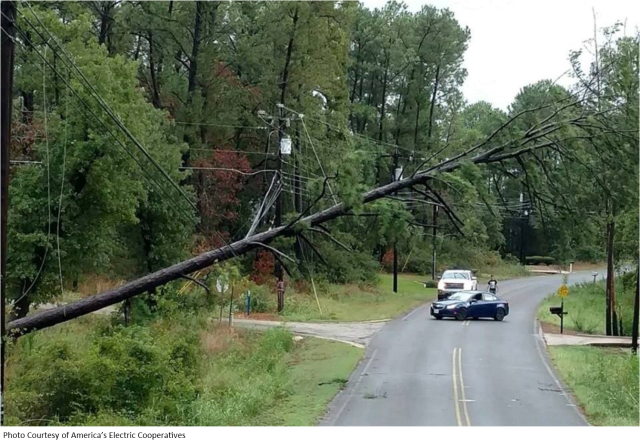 In the photo above, the tree is obviously being supported by the phone/cable lines. Obviously, the poles did not fail so there is an indeterminable amount of load on the bundle just from the tree weight.

What are your options? Whatever you do, don’t just nibble your way back from the top until the tree flips off. Not only do you have no control of where the tree goes, the sudden recoil can break poles, which are already under a severe side load. Rapidly releasing the stored energy can deal the fatal blow, then your problems just become much bigger.

After ensuring that all power is dead and grounded, you could use a crane to lift the tree, allow the phone/cable line to return to height, then trim the tree back to the point where the crane could do a safe laydown to the ground. No crane available? This can still be done safely.

Before cutting back on the tree, you must take control of the bundle using ropes, slings, or any safe method that allows for slowly releasing the strain off the bundle after the tree is removed. I watched one crew use slings over the bundles, then a chain foil to pull down until they knew they had control of the bundle, then nibble the tree off. Then they released the stored energy with the chain foil (they needed plenty of runout chain).

Having no method to quantify how much load the slings and rigging will be placed under requires overengineering the situation with a safety factor. How many phone/cable lines are there? Are there primary/secondary conductors under the tree, are the primaries tree wire? Tree wire is aluminum with a steel core, and is very strong. Copper wire primary will usually break. The phone/cable line and tree wire all look the same, with black plastic covering. Phone/cable lines also use steel messenger wires that are very strong also. 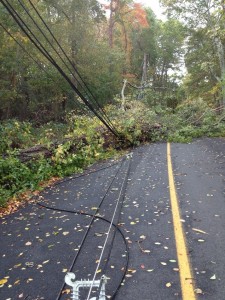 Not only will the phone/cable bundles be a source of stored energy, but the neutral wire is a steel cable wire (normally below the primary at the secondary level, embedded in the triplex or alone). In this case the Hendrix cables and messenger wire under the trees will have a tremendous amount of stored energy.